Table of Contents show
1 The University of Phoenix case
2 The Career Education Corporation case
3 The “90/10” loophole
4 Assistance for vets, service members, and other students is readily available
5 In closing… 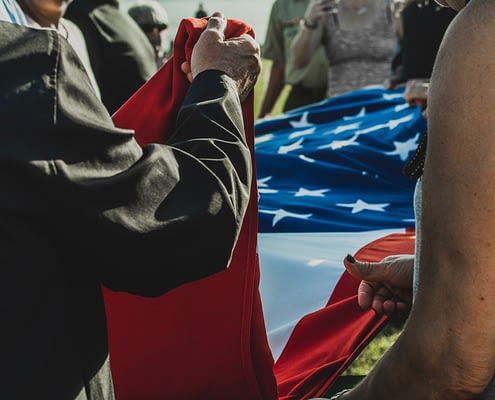 In a strongly-worded post dated July 7, 2021, Samuel Levine, the Acting Director of the Federal Trade Commission’s Bureau of Consumer Protection, referred to certain educational organizations as “predatory schools” and “scammers.”

According to Levine’s post at consumer.FTC.gov/blog/2021/07/targeting troops, “scammers and large corporations” are targeting active service members and veterans because of the steady paychecks and benefits they receive. Levine also stated that service members transitioning to civilian life are prime targets.

The University of Phoenix case

Referring to the organization as a “massive for-profit university,” Levine stated that University of Phoenix lured active duty military personnel and veterans in by making false promises. UOP entered into a settlement agreement with the FTC that included refunding $50 million to students and canceling an additional $141 million in student debt.

Levine’s post doesn’t provide further case or settlement details, but a previous article posted to the FTC site in December 2019 (consumer.ftc.gov/blog/2019/12/ftc-settlement-against-university-phoenix) discusses the matter. The FTC alleged that, in its “Let’s Get to Work” ad campaign, UOP and its parent company, Apollo Education Group, Inc., falsely claimed to have relationships with major corporations and that those relationships created job opportunities for their students.

The FTC article also states that UOP falsely claimed they had worked with these corporations to design coursework. Corporations named in the UOP ad campaign included Microsoft, Yahoo!, Adobe, and Twitter. The FTC contended that the misleading ad campaign was created specifically to recruit “military and Hispanic consumers.”

Levine’s post also mentions action taken by the FTC against Career Education Corporation. Levine stated that, in its settlement with the FTC, CEC agreed to pay $30 million to students recruited through the use of deceptive websites. Levine referred to them as “phony government websites” and stated that they were used to “get students in the door.”

Additional details regarding this case were provided in a previous release posted by the FTC in August of 2019 (gov/enforcement/cases-proceedings/152-3264/career-education-corporation). In addition to CEC, the defendants in the case included American Intercontinental University, AIU Online, and Colorado Technical University.

The FTC contended that, in addition to other unlawful practices, the defendants falsely represented that they were affiliated with the military and that they could provide assistance with benefits and employment. The FTC also stated that defendants used information collected to call consumers who were on the National Do Not Call Registry.

Levine also mentions the “90/10” loophole in his post, stating that, until Congress did away with it early in 2021, the loophole provided incentives for “predatory schools” to go after military personnel. Levine does not provide details regarding the “90/10” loophole, but, according to an article at veteranseducationsuccess.org/90-10-loophole, the loophole was an unintended consequence of a rule relating to revenue collected by for-profit educational institutions.

Before it was removed, the rule required that for-profit colleges make at least 10% of their money from sources other than federal student loans and grants otherwise known as Title IV education funding. The intent was that the 10% or more come from private funding sources.

Rule makers evidently overlooked the fact that funding available to veterans through the G.I. Bill is not Title IV funding, thus private colleges were provided with an incentive to recruit veterans. While the cases and settlements cited by Levine are certainly indicative of a larger problem, government rule-makers actually created the loophole that provided the incentive for some of the behavior Levine refers to in his post as “predatory.” Fortunately, repealing the rule has resolved this particular issue.

Assistance for vets, service members, and other students is readily available

Levine points out that education-related help is available to anyone who needs it, not just military personnel and veterans. The Department of Education (it’s official acronym is ED) operates Opportunity Centers that provide assistance to anyone considering applying to colleges and obtaining financial aid.

More information is available at www2.ed.gov/programs/trioeoc/index.html. Active military personnel should speak with their Personal Financial Managers if they need assistance. For help with using their G.I. Bill education benefits, veterans can call the Veterans Administration G.I. Bill Hotline at 888-GIBILL (888-442-4551).

Director Levine encourages anyone who encounters the type of deceptive behavior described herein to report it to the FTC via their fraud complaint site, ReportFraud.FTC.gov.

Veterans should also report this activity using the VA’s G.I. Bill Feedback Tool at va.gov/education/submit-school-feedback/introduction. Those with federal student loans who feel that their schools made false claims or possibly violated the law can apply for loan forgiveness. Information is available at studentaid.gov/articles/student-loan-forgiveness/.

The FTC recommends doing some research before you enroll in a for-profit college or university. Search the name of the institution at the Department of Education’s College Navigator site, nces.ed.gov/collegenavigator/. Data available there includes, but is not limited to, accreditation status, instructor to student ratio, whether the school is for-profit or non-profit, and student loan default rates. It is also recommended that you perform general searches using the name of the school in combination with words like “complaints,” “scam,” and “reviews.”

Microsoft’s New Windows 365 – An Option to Consider for Remote ...
Scroll to top